Why US equities could continue to outperform

Markets across the board are struggling with uncertainty on Thursday, and US equity futures are all pointing lower at the time of writing. Events weighing on investors include, the continuing trade dispute between the US and China, which has flared its head once again, and the as yet unsigned Nafta deal is also leaving investors’ nervous. However, we think that the biggest driver of a temporary sell off in US indices could be profit-taking as we head into month-end, and there is the potential for further upside in the weeks to come.

August: a month of Sunday’s for tech investors

In fairness, August has been a good month for US equity indices, the S&P 500 is up nearly 4% on the back of a strong Q2 earnings season (sales growth was up by an impressive 9% for the entire S&P 500 last quarter, and gains were fairly broad-based across sectors). There were also individual success stories over the month including Apple, which rose some 16% and became the world’s first trillion dollar company.

However, it’s the smaller Advanced Micro Processors that has really wowed on the S&P 500, it is up more than 30% in August, and 145% higher this year. You could argue that AMP’s advance is the sign of a healthy tech sector, or you could say that with a P/E ratio of 80.00 it must be ripe for a sell off? While we can see why investors are starting to get concerned, especially with valuations at this level, we continue to think that the US looks better positioned for further gains compared to its peers.

Don’t worry about US macro, yet…

Firstly, too much is being made about the economic data disappointments in the US. The Citi Economic Surprise index has been declining all year, but this has no correlation with the S&P 500. Far more important is the corporate earnings outlook, and here the US continues to do better than its peers in Europe. As mentioned above, sales growth for the S&P 500 was up nearly 10% last quarter, which compares to a 2% drop in sales growth for the Dax index in Germany.

Why China is the biggest looser from the US trade war

Secondly, there is only one winner from the China/ US trade stand-off, and that is the US. As you can see in chart 1 below, which shows the S&P 500 (white line) and the Shanghai Composite Index (orange line), the US tariffs on Chinese goods have weighed on the Chinese index, while they have had no repercussions on the US index. This suggests that the investment community sees US tariffs on Chinese goods as more damaging to Chinese economic prospects compared to the US. The US may not be suffering because investors see the US export industry as too small to matter, or because it gives space for US-owned products to gain an even bigger foothold. Either way this is a fascinating chart, and rather than suggest that US trade tariffs will see a wave of money leave the US, it suggests that the opposite is true. We don’t believe, at this stage, that Chinese shares look oversold in comparison to US shares, rather it suggests to me that momentum is fully on the side of US stock indices. 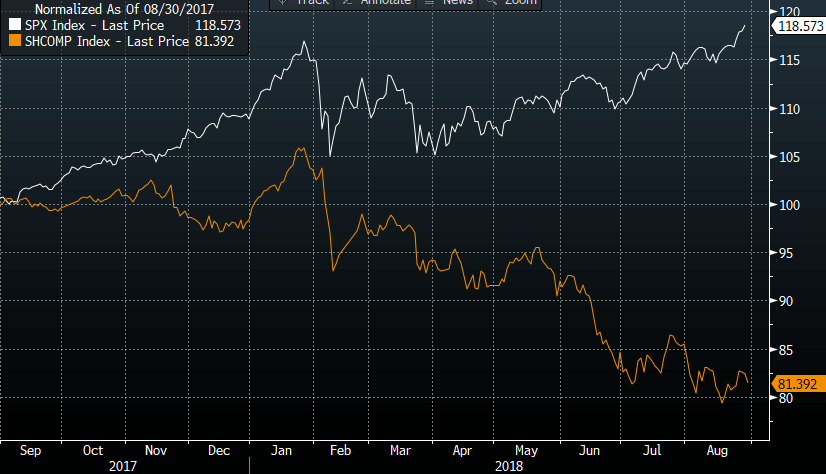 Why we think US indices will continue to do well

Lastly, we have mentioned about sectoral performance in the S&P 500 before, and we continue to think that it looks healthy, as you can see in chart 2 below, with most sectors of the US continuing to make gains after July’s blip. The S&P 500 will fall at some stage, however we do not think that any such fall is imminent, due to the relatively strong performance across a variety of US stocks. Thus, a sell off is inevitable, but that is a concern for 2019, not for September 2018. 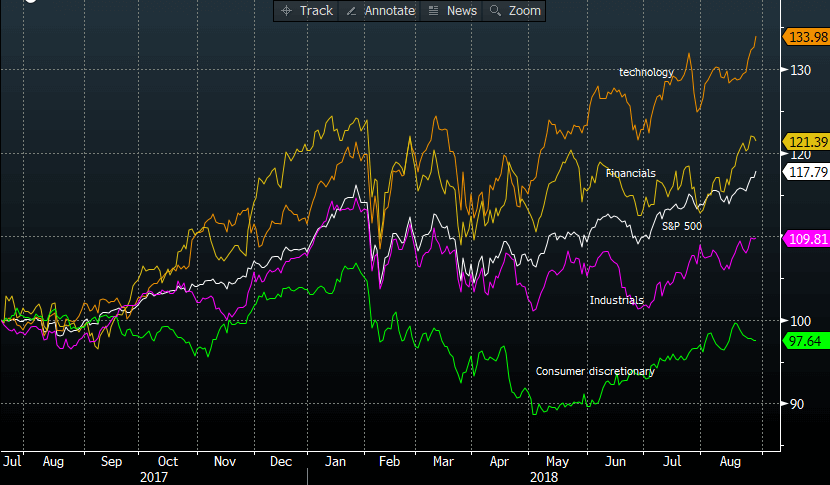