On Wednesday, British finance minister Rishi Sunak will release his spending plan and says that there is no returning to austerity despite the damage that the coronavirus inflicts in the British economy.

He said he would announce “quite a significant” increase in funding for public services.

“You will not see austerity next week,” Sunak told Sky News on Sunday. His priority in the plan was to fight the crisis that is brought to the British health service and economy.

More than 3 billion pounds will be set aside in extra help for the health service.

Sunak said, on Wednesday he will show the “enormous strain” on the economy and now was not the time to reduce spending or raise taxes.

“Once we get through this crisis, we need to think more about returning to a more normal path,” he told Times Radio.

In an interview with the Sunday Times, Sunak said he hoped that, by the spring, with progress on vaccines and testing for COVID-19, he would be able to “look forward” to the job of tackling the public finances.

Though yields on government debt remain close to record lows, Sunak is expected to announce on Wednesday a freeze on public sector pay to offset some of his spending.

“When we think about public pay settlements, I think it would be entirely reasonable to think about those in the context of the wider economic climate,” he said.

Spending for infrastructures will also be included in the spending to help Johnson’s promise to spread economic growth in the regions that is lagged by the decreased spending caused by restrictions from the coronavirus.

In the Brexit front, Britain also faces risk of an economic shock if it fails to strike a deal before the December 31 transition.

The short-term impact of not getting a deal however will not be as hurtful as it did when the COVID-19 hit the economic outlook of UK, Sunak said. 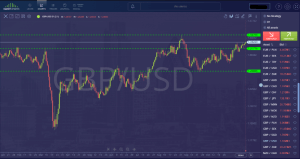 In the daily charts of GBP/USD, the pair edged up early Monday morning in Asia session.

As what we can see in the chart, the sterling is surging up against the US Dollar and is being supported at the support level at 1.31776.

With the dollar’s performance affected by the vaccine sentiments from investors, the dollar is falling against a basket of major currencies.

Sterling on the other hand is being supported by Brexit hopes between EU and UK. A decision that will come in a few weeks greatly affects the sterling’s performance. A Brexit-deal will most likely support the sterling and we may see the pair test the resistance level at 1.34 or break out from this level.