UK’s Economy Lagged in September, the Worst is Yet to Happen  - LEARN TO TRADE
13 November 2020

UK’s Economy Lagged in September, the Worst is Yet to Happen

The economy of Britain grew slower by 1.1% in September compared from that of August while lagging other rich nations as it struggled to recover from the shock of the pandemic even before the latest Covid-19 lockdown.

The slowdown in the data that is shown on Thursday, gave expectations that the economy will shrink once again as 2020 ends with the uncertainty of UK getting a Brexit deal on December 31.

Gross domestic product grew by a quarterly record of 15.5% between July and September but that failed to make for its losses of 20% during the lockdown between April and June.

The monthly growth rate slowed to 1.5% based on analyst’s poll by Reuters.

The economy is being supported by more than 200 billion pounds of emergency spending and tax cuts ordered by finance minister Rishi Sunak and the Bank of England’s almost 900 billion pound bond-buying program.

Despite those efforts, the economy has suffered the biggest GDP drop among major economies listed by the Office for National Statistics. The drop in GDP was due to the 50,000 coronavirus fatalities on Wednesday. This has been recorded as Europe’s highest death toll.

Britain’s initial lockdown lasted longer than in other countries and hammered services firms which make up 80% of the economy.

Since 2019, the GDP remained almost 10% smaller compared to the previous year, the falls are twice as big as the falls in Italy, Germany and France and nearly here times the size of the U.S. drop, the Office for National Statistics said.

BoE Governor Andrew Bailey said there was still a “huge gap” in the economy but news of a potentially effective Covid-19 vaccine would help lift the uncertainty.

Before the news of the vaccine trials were out, the BoE said the world’s sixth-biggest economy was likely to shrink by a record of 11% in 2020 before growing by just over 7% in 2021.

“Britain’s COVID crisis, and its recovery phase, will take far longer than many people first though,” said James Smith, research director of the Resolution Foundation think-tank, urging Sunak not to start reversing his spending surge quickly. 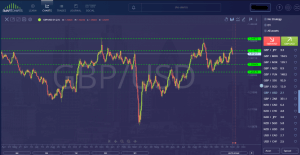 In the daily charts of GBP/USD, the pair edged up early Friday morning in the Sydney session.

As what we can see in the chart, the pair edged lower yesterday completely breaking down from the support level at 1.31966. Despite the uncertainty in the US dollar, the pound is falling further due to Brexit hopes wavering and sentiment from the vaccines.