UK and EU Still on a Stalemate on Trade Deal

The European Union and Britain have failed to bridge the gaps in securing their trade deals and reaching an agreement on persistent sticking points is still way off.

Talks have been intensified for two weeks as UK and EU is trying to strike a deal to protect nearly a trillion dollars of trade from severe disruption, stubborn differences over fisheries, fair competition and settling disputes have yet to be overcome.

Time for striking is running out and some progress of safeguarding economic fair play was not enough said Irish Foreign Minister Simon Coveney.

“If there is not a basic set of rules around fair competition… and if there is not a governance structure that can deal with disputes, then in my view there will not be a trade deal,” Coveney told an online conference.

“There is some progress being made in this area but it’s far from concluded yet.”

The European Union hopes that any deal can be agreed by Nov. 15 before Britain’s standstill transition out of the EU expires at the end of the year.

Businesses hope that the pressure that COVID-19 brings will fasten the deal to avoid chaos in commerce, energy ties and aviation.

The EU demands negotiations on the fisheries that proves an especially tricky problem.

“We have not yet found a solution on the fisheries,” a spokesman for the EU’s executive European Commission told a news briefing. “WE are not there yet. A lot more work remains to be done.”

“We’ll only be able to make progress if the EU accepts the reality that the UK will have the right to control access to its waters.” Says by a spokesman for PM Boris Johnson.

“There are significant gaps that do remain between our positions in the most difficult areas, and there is much work still to be done if we are to bridge those gaps.” 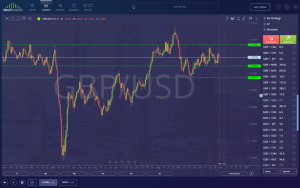 In the daily charts of GBP/USD, the pair edged lower early morning in the Asian Session.

As what we can see in the chart, the sterling gained early morning almost resisting at the resistance level at 1.31966. However, the DXY quickly pushed higher due to the uncertainty in the U.S. Presidential Elections and a risk-off sentiment rose for a brief moment which pushed the dollar higher.

One of the reasons which may also factor in the losses of the sterling is the short break from the trade talks between the EU and UK regarding the Brexit deal. The possibility of a no-deal Brexit is a negative sentiment for the sterling.

Trading any currency paired with the US dollar should be taken with pre-caution this week due to the volatility spikes that the U.S. presidential elections bring. It would be best to stay on the sidelines for now and wait for the market to calm down.