UK Consumer Sentiment Falls Since the Breakout of COVID-19

As lockdown restrictions tightened across much of the country, British consumer sentiment fell this month, according to a long-running survey published on Friday.

The Gfk Consumer Confidence Index tumbled to -31 in October, its lowest level since late May down sharply from a nine-month high of -25 in September.

The six-point fall in the index in the space of a month was the largest since the 25–point decline recorded just after the start of the lockdown in March.

“There’s a worrying threat of a double-dip in consumer confidence as concerns for our personal financial situation and even deeper fears over the state of the UK economy drag the index down,” Gfk director Joe Staton said.

The index showed an especially 12-point decline in households’ outlook for the economy over the next 12 months.

Britain’s recovery contracted 20% more than in any major advanced economy.

Retail sales in July and August were above pre-pandemic levels, and the number of house purchases in September was close its level a year earlier.

Bank of England Chief Economist Andy Haldane said on Thursday that consumer spending has been unexpectedly resilient in Britain, and noted that in the United States a second wave of COVID cases had done little to dent spending there.

But other economists worry that a big part of the rebound has been driven by pent-up demand which is likely to fade, especially if unemployment climbs steeply in the final months of the year like the BoE forecast in August.

Britain’s main furlough program expires at the end of this month, and finance minister Rishi Sunak announced a fresh set of changes to its replacement on Thursday following warning from business than it did too little to preserve jobs. 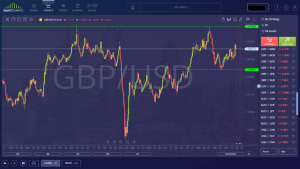 In the daily charts of GBP/USD, the sterling was down against the dollar Friday morning in Sydney session.

Sterling slipped overnight on uncertainty over Brexit outlook, but it is up 1.2% this week and is clinging on above $1.30 thanks to hopes that Britain and the European Union can reach a trade deal before a transition period ends on Dec. 31.

British, European and U.S. Purchasing Managers’ Index figures are due later on Friday may shift the mood of the pair. It is best to proceed with pre-caution for this pair today or staying in the sidelines may be the best strategy to use for this pair’s trading day.