In the first five months of the fiscal year, U.K. government borrowing soared to 173.7 billion pounds ($222 billion) as costs of coronavirus pandemic continued to mount.

The Office for National Statistics said Friday that the budget deficit alone in August was 35.9 billion pounds. Britain now has borrowed more since a national lockdown was imposed in March than during the whole of the year following the 2008-2009 financial crisis.

The figures come a day after Chancellor Rishi Sunak unveiled a 5 Billion-pound plan to rescue millions of jobs and businesses from a winter crisis as a resurgence of Covid-19 threatens to derail the economy.

The public finances were wrecked by the pandemic. Debt is now above 2 trillion pounds and the deficit – the amount the government needs to borrow to fund its spending is set to be approaching 400 billion pounds in the current fiscal year.

At almost a fifth of gross domestic product, it would represent the largest gap in British peacetime. In 2009-2010, the deficit hit 158.3 billion pounds, or around 10% of the economy.

With Bank of England bond-buying keeping borrowing costs at a record lows, the deficit is affordable for now but Sunak has said the public finances will have to be returned to a sustainable footing once the crisis is over.

Tax revenue was down 14% in August compared with a year earlier and spending jumped by a third. Spending was boosted by 500 million pounds paid to restaurants under Eat Out to Help Out, a Treasury-sponsored initiative to help the beleaguered hospitality industry, and 11 billion pounds for workers idled as a result of the pandemic.

Even before Thursday’s announcement, the Office for Budget Responsibility put the cost of direct support for the economy in 2020-2021 at over 190 billion pounds.

Net debt was 2.02 trillion pounds last month, or 101.9% of GDP, the highest debt ratio since 1961. A cash-based measure of the deficit used to determine government bond issuance was an unprecedented 221.2 billion pounds in the fiscal year to date. 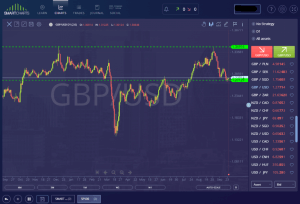 In the daily charts of GBP/USD, the pair opened at 1.2748 early morning on Friday, Asia session.

The pair was supported at the 1.27129 support levels and bounced higher pushing gains for the sterling. Further confirmation of the price threading higher may be seen on Monday next week. Sterling bears however are eyeing out for the price to breakdown this support level to further confirm their positions.

The GBP/USD pair inched up 0.04% to 1.2754. The pound was supported by U.K. Chancellor of the Exchequer Rishi Sunak’s ‘winter plan’ proving limited support for workers as the country continues to battle against a second wave of COVID-19.

Information on this page is solely for educational purposes only and is not in any way a recommendation to buy or sell certain assets. You should do your thorough research before investing in any type of asset. Learn to trade does not fully guarantee that this information is free from errors or misstatements. It also does not ensure that the information is completely timely. Investing in the Foreign Exchange Market involves a great deal of risk, resulting in the loss of a