On Tuesday, the pound slumped to a nearly two-month low as the U.K. implemented its new lockdown measures to contain the re-spreading of the virus but it also means that it could halt the pace of recovery as the second wave of Covid-19 gathers pace.

Britain’s Prime Minister Boris Johnson warned the country was at “perilous turning point” and reversed the lifting of some lockdown measures in England.

The new restrictions include a curfew on pubs and a tightening of the ‘rule of six,’ which limits social gathering up to a maximum of six people. Johnson suggested that these measures may likely to remain for six months.

Aside from the COVID-19 concerns, the pound is also pressured by the ongoing conflicts about a no-deal Brexit. Johnson’s internal markets bill, which undermines parts of the Brexit deal, has soured UK-EU relations.

The bill is not expected to be debated in the House of Lords until after a key summit with EU leaders in mid-October, according to media reports.

The pound had earlier found some reprieve after Bank of England governor Andrew Bailey back against expectations the bank was considering cutting rates below zero. “Yes [negative rates] it’s in the tool bag, but that does not imply anything about the probability of us using negative interest rates at the moment,” Bailey said.

The weak start to the week for cable comes in the wake of data suggesting bullish bets on the currency pair is running out of steam.

“The second most sizable move in G10 positioning last week was the erosion of GBP net long positioning with a drop from 7% of open interest to 2%,” ING said in a note.

“Still, GBP net shorts are nothing but a fraction of what we witnessed in other period where a no-deal outcome appeared as tangible as it is now.” 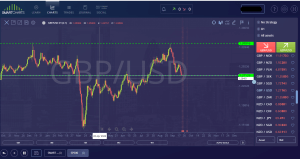 In the daily charts of GBP/USD, the pair opened at 1.2727 early morning in Asia session.

Amidst the lockdown measures that are implemented to contain the virus once again, the sterling also fell against the dollar since Monday morning.

Worries of possible failure of coming into terms with free trade deal with the EU also strained the sterling further pushing the price lower than the dollar.

In the chart, we can see that the pair is already touching the 1.27129 support level. Speculations of the price breaking down from this level will further support the short positions of sterling bears. They are now eyeing out this position that would possibly break down from the support level in the coming days.