On Monday, the sterling with fears of a no-deal Brexit, flirted with a 1 1/12-month low against the dollar. Investors also waited for Japan’s ruling party to choose a successor to Prime Minister Shinzo Abe.

The pound was under pressure fearing the Britain will end its post-Brexit transition period with no trade agreements.

Last week, London explicitly acknowledged that it could break international law by ignoring some parts of its European Union divorce treaty, prompting a rapid rebuke from the EU’s chief executive.

Former British prime ministers Tony Blair and John Major said on Sunday Britain must drop a “shocking” plan to pass legislation that breaks its divorce treaty with the European Union, in a breach of international law.

The dollar stood at 106.13 yen, stuck in its familiar territory in the past couple of weeks.

Suga has long been a loyal aide to Shinzo Abe and has vowed to continue his policies, few market players expect radical changes.

“The focus is on the line-up of his cabinet as well as whether he will call a snap election,” said Minori Uchida, chief FX strategist at MUFG Bank. “He is saying he will continue and advance Abenomics but its questionable how much advancement he can make.”

The common currency was supported after the European Central Bank showed no apparent sign of stemming the single currency’s appreciation.

Some euro zone countries, such as France and Spain, are reporting rises in coronavirus infections, in contrast to fall in the United States, clouding the outlook for economic recovery.

The dollar’s index against a basket of currencies stood little changed at 93.317, with focus on Federal Reserve’s policy announcement on Wednesday.

Expectations of further monetary easing by the Fed have been a drag on the dollar. The dollar index has lost more than 4% so far this quarter.

The Fed has announced late last month that it has adjusted its policy strategy, noting that it wants inflation to average 2% over time.

But some analysts say markets may have gone too far in expecting further Fed stimulus.

“Having set aside yield curve control (YCC) as a near-term policy option, the FOMC does not seem to have an operational consensus on how to use the balance sheet,” New York-based strategists at Standard Chartered Bank wrote in report. “This may disappoint investors.” 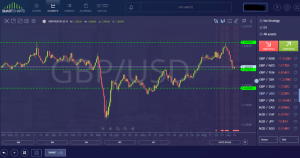 On the daily charts of GBP/USD, the pair opened up at 1.280 on Monday morning in Asia session. As what we can see, the pair touched the support level at 1.276 and bounced back up pushing the price higher.

Amidst Britain’s no-deal Brexit worries, the pound has risen in the Asia session. In technical analysis, once a price hits support, it may bounce back up from this level but further speculations of Brexit talks might further push the price lower beyond this support in the coming days.

Speculations from FX strategists around the globe also stated that the sterling may not see any gains past the resistance at 1.349 until the end of this year.

With these speculations, we can see for now that the volatility in in sterling is low and might trade inside the support at 1.276 and resistance at 1.34. Bears are also waiting on the breakout from the support level to place their short positions.

We have a long week ahead. We will never know what the market will do, for now traders are staying on the sidelines for the pair as risk-appetite is likely to give sudden spikes for the pair.