Pound Outlook Turned Positive But Further Gains may Depend on Brexit

Ahead of the U.S. Presidential Elections, the sterling picked up gains. The question is, will it maintain its gains even after the presidential elections?

Traders are no longer bearish in the U.K. currency for over a week now, opening the way for an advance before the Nov. 3 U.S. Presidential Elections. Behind the shift in this gauge of positioning and sentiment lies the latest progress in Brexit negotiations, and a bias in the market to sell the dollar in the run-up to the election.

The sterling’s gains after the elections may still depend largely on the results of the negotiations between the U.K. and the European Union will. The market’s overall risk appetite given uncertainty surrounding the pandemic will also prove key.

According to traders in Europe, leveraged funds were fading the move lower, with institutional investors looking to add topside sterling exposure in the options space.

Charts are also working in the cable’s favor. The currency remains within a bullish trend channel in both the short and medium term.

But caution is still warranted. Sterling reached a six-week high of $1.3177 in Oct. 21, only be falter again as profit taking kicked in. Corporate selling on a hedging basis has also been a key element in this pullback, according to a trader in Europe familiar with the transactions who asked not to be identified because he is not authorized to speak publicly.

And the outlook further out into the future still remains murky. One-month risk-reversals remain in bearish territory for sterling as investors look for an official resolution in Brexit talks before turning bullish in the longer-term too.

The chances of the pound trading 5% higher in six months-time are slightly higher than the probability of an equivalent drop. 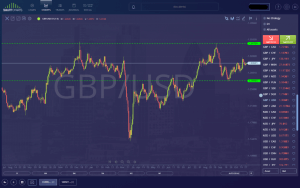 In the daily charts of GBP/USD, the pair edged higher at the nearing end of the Tokyo Session.

Investors are keeping an eye on the negotiations for a last-hour Brexit trade deal between the U.K. and the European Union, with the pound likely to be supported by increased hopes of a deal being reached between the two parties.

Although the pair is still trading inside the support and resistance levels, we can see a possible uptrend forming from the bounce at the support level last September. The uncertainty in the dollar further boosts the pound with increased hopes of a Brexit trade deal which is due on December.