On Thursday, the pound swings between gains and losses as traders were uncertain on the progress of Brexit between U.K. and EU.

The U.K. and EU continued talks in Brussels to iron out key issues holding up the potential post-Brexit deal, but differing reports of progress suggest both sides remain wide apart on reaching a consensus.

Reuters reported, citing an EU official, that were no signs of a “landing zone” on key sticking issues, including fisheries and the level playing field in the latest trade negotiations within the U.K.

That cooled optimism from an earlier Financial Times report, citing unnamed sources, that a landing zone on state aid has been identified but “fishing is the last sticking point.”

The U.K. has made it clear it is unlikely to cave in on demands to take control over access to its waters and fish when the Brexit transition period ends, rather than stick with the EU’s Common Fisheries Policy, which set fishing quotas among EU member states.

“So now, we’re going to be absolutely crystal clear with the EU … if you’re not going to talk turkey with us, that’s fine. We can leave, we can say that’s it, no negotiated outcome. We’re ready, come what may,” Cabinet Office Minister Michael Gove said.

The latest round of trade talks kicked off against a souring backdrop after the EU follow up on its threat to take legal action against the U.K. after it failed to scrap its internal market bill that undermines the withdrawal agreement.

Pressure on negotiators to break the stalemate is building ahead of the European summit in mid-October, when EU negotiator Michael Barnier is slated to provide the EU with an update on Brexit negotiations. 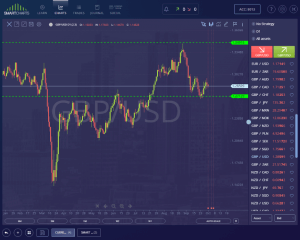 In the daily charts of GBP/USD, the pair opened at 1.2884 Friday morning in Sydney session.

As we can see in the support and resistance levels in the charts, the price bounced from the support level last September 25, 2020 and tried to push pound higher.

As the opening of this week’s last trading day, the dollar seems to be strengthening against the pound despite investors seeking out riskier currency. The reason for this may be the ongoing Brexit deal between U.K. and EU which might lead to a no-deal.

Further bearish confirmation will be acknowledged as soon as Monday next week by the sterling bears. The pair may end up breaking the support level to further confirm the weakening of the sterling against the dollar.