Possibility on UK and EU Reaching A Trade Deal

The US special envoy Mick Mulvaney to Northern Ireland has said that he believes the UK and EU can still reach a trade deal and has urged optimism from both sides.

It was his first trip to NI since he was appointed as the special envoy by President Trump in April.

The latest round of talks between the UK and EU will take place this week to reach a trade deal before the October 15 deadline, set out by Prime Minister Boris Johnson.

Mr. Mulvaney, who is a former chief of staff to President Trump, said the US government had “confidence” the UK and EU will reach an agreement before the deadline.

“Generally speaking, politicians and politics do tend to put things off to the last minute but at end of the day usually they are able to get things that work for everybody. Is it clean, is it efficient, does it look good? Probably not but that’s politics.” Mulvaney said to BBC News after holding talks with the NI secretary.

He added, “What the attitude of my government is – is that we are confident the EU and UK will be able to work this out in a way that’s acceptable to everybody.”

He also said the US government would continue to view the NI “through the prism of the Good Friday Agreement”.

Mr. Mulvaney was asked if he had concerns about the British government’s Internal Market Bill – the legislation that would override parts of the Brexit deal – Mr. Mulvaney said it was a “fail safe”.

“It only comes into play if something else doesn’t happen – it’s gotten the attention it deserves but I don’t want my country to jump to conclusions – we need to look rationally, calmly and coolly at it,” he added.

They are due to meet again later in the week she was looking forward to “further positive discussions.” 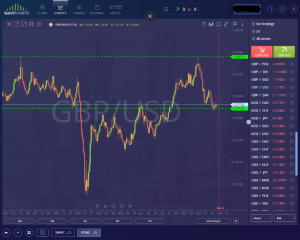 In the daily charts of GBP/USD, the pair opened at 1.2741 Monday morning in Asia trading session.

The sterling has seen gains since early morning on Monday and the bullish candle seems healthy enough to thread higher. With the ongoing Brexit woes almost coming to an end, Mick Mulvaney says that UK and EU might reach a deal which further boosted the pair.

The pair has touched the price support level several times at 1.27129 which signaled false breakouts and the price kept retracing from this level for the third time. Now the price is above the support level and we may see further gains if there are positive news regarding Brexit and the lockdown measures to contain the spreading of the virus in the Euro zone.