The currency market proved the Euro strength this week. With the elections on the UK, traders seemed to have turned to the continental currency as most crosses continued the rally to the upside or at least stayed around the same levels from the end of last week. On the asian side, AUD, NZD and JPY showed very indecisive moves with the Yen staying within the 200 pip range hanging from March while the Oceania currencies presenting the correction after the big moves.

Regarding the stock indices in Europe, the pullback continued although the end started to announce the price behaviour characteristic of the beginning of the next moves to the upside.

The American side is (still – yes…) hitting and not passing the resistance barrier while in Asia, Nikkei and Hang Seng showed a bigger but quite expected pullback still within the natural trend based patterns.

Oil price continued the steady rise and ended the week with a pullback while Gold shows no signal of being able to escape the tight range that has been the rule since March. 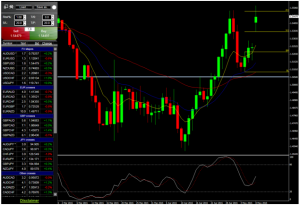 Next week is the week after the major news – elections in the UK and the Non Farm employment change – so we are counting with the ‘normal’ price action on all markets. The trading week might trigger on Monday with the first (potential) announcement from the Bank of England after the elections along with the Eurogroup meeting after a few disagreements being let out by the press between the Greek Finance Minister and some of the European colleagues…

On Wednesday, in UK, the inflation report will definitely be one of the talking points while the main event will come from the European Central Bank Monetary Policy accounts might shed some light on the current rise of the EUR crosses.

On the currency market, we are now waiting for the market to settle as the two previous weeks showed major reversal moves and we are now staring in doubt and questioning whether these are longer time frame pullbacks or a definite change in sentiment.

As for the Indices, we are currently witnessing some major pullbacks on the European side still within the usual trend based patterns, as the American Indices are not showing any decisive moves towards breaking the resistance level(s) that have been acting pretty much as a wall for the last couple of months. Meantime, in Asia, the highs and the lows on the charts remain as they were for 2015 so far, going higher and higher after each correction.

On the commodities side, still no decisive moves from either instrument – Gold and Silver – while Oil is slowly but steadily showing higher moves to the upside that show nothing but a shy yet stable uptrend. The question is once again if this is a long term move or a strong correction after the gigantic drop last year.