After last week’s turbulence on the currency market, EUR, GBP against the USDollar decided to take a week off. Price is now at a very indecisive moment with inside bar after inside bar which is only normal after the huge bar last Wednesday. AUD, NZD, JPY and CAD all showing the surprising weakness of the American currency as price is now at a point where it should either get back to the overall trends or prove the rejection.

On the stock market, Europe’s main indices didn’t prove the usual correlation with CAC reaching new all time highs in the beginning of the week while DAX showed a pure consolidation week. The FTSE on the other hand was a full on record breaking week starting on the 11th until the 24th.

On the American indices, the correlation is still very visible with NASDAQ, DOW and S&P all retesting the last all time high but failing and pulling back to the lowest levels from last week.

As for Crude, as mentioned last week, the support level at 44 keeps standing in price’s way as this week showed continuously higher levels. Gold and Silver still showing higher highs as it seems to be (once again) retesting the overall cyclicity of the downtrend from January. 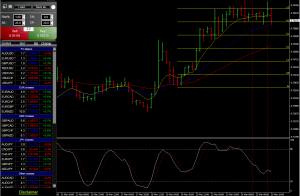 Next week we should expect a busier than usual start as on Monday we will have a speech from the European Central Bank Mario Draghi and later that day from  Member Fischer from the Federal Open Market Committee (FOMC). The rest of the week, regarding the news, should be a quieter one until Friday where the Final GDP announcement and the speech from the Federal Reserve Chairman – Janet Yellen – can be the trigger for the usual increase on the volume of transactions.

In terms of potential opportunities on the currency market we’ll still be waiting for price action to lead the way as most pullbacks are still in place in an apparent weak moment from the USDollar. This is one of those times where learning to sit on your hands might just prove to be the best option…

On the European indices, same indication as on the 2 previous weeks/reports: wait for price action to tell us that the trend is still on and specifically when to do it. As for the American side, price allowed us to get in it again last week and it is now at the normal correction/pullback phase. As always, exit wise, make sure you respect the decisions you have made before making any emotional call.

On the commodities side, and as expected, price is still pulling back although there are still reasons to believe this is just normal price behaviour before the overall trend starts bringing price to the downside again.