The beginning of the year proved the US Dollar strength once again with almost every currency losing value against the American currency. The only exception was the EUR:USD that started the week with a mildly convincing drop that gave it all back by the end of the week ending in about the same value at 1.09. The EUR crosses also showed this unexpected strength with all of them growing in value up to the following resistance level that seemed to hold it by the end of the week.
Another currency that is clearly gaining is the Japanese Yen as all the crosses proving its renewed strength and the charts were very clear and provided some very good opportunities for a bearish market.
As for the Indices, the news from China and the 7% maximum daily drops hit the Stock market at full power with every major Index lowered its value to levels not seen since September. DAX and the European indices now retesting previous support levels (and trendlines that go back a few years!) while the American ones – S%P, DOW and NASDAQ – all proving the overall weakness and dropping back to prices last seen 4 months ago. Obviously, the Asian indices witnessed the same correlation with the Nikkei falling down to 17200 and the Hang Seng dropping below 20000 for the first time since 2013.
On the commodities side, Crude price seems to have no bottom with price currently falling even further now at 31 while the Gold price finally showing some increase and breaking the resistance level at 1090 and holding slightly above.

CADJPY (4H Chart) – Continuation Long – 05.01.2015 – With a strengthened Japanese Yen and an increasingly weaker Canadian Dollar we were paying close attention to the lower time frames on this pair. On the 5th, the pullback and bounce off of the moving averages along with a high test test bar made us place this trade. Currently at +6% in profit and still looking good for further opportunities. 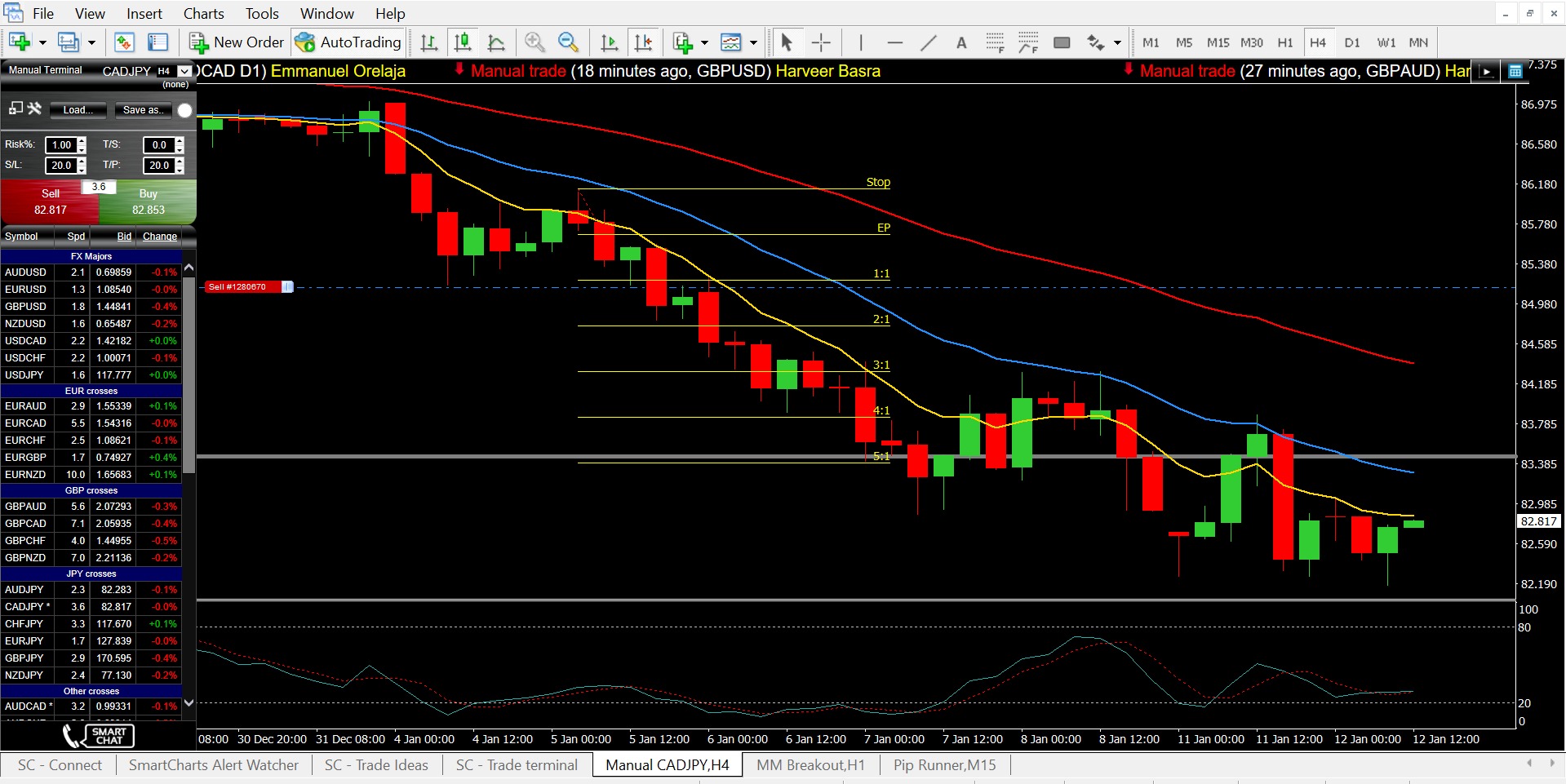 This week should start slowly with no big announcements on Monday.
On Tuesday, the news pick up franc sell offup again with the speeches from the Governors of Japan and UK as on Wednesday we can count on some extra volatility around the Crude Oil Inventories numbers as the big players will obviously be looking at this data regarding the current price of Oil.
Thursday will be about the British Sterling along the Official Bank rate and the Monetary Policy from the UK, as well as the report from the European Central Bank regarding the latest Monetary Policy from Europe and the Eurogroup meetings.
On Friday the week will close with the ECOFIN meetings and the preliminary numbers from the US Inflation.
This is expected to be the first ‘normal’ full on trading week of the year so we are paying close attention to the charts and the price action getting back to normal and presenting opportunities to trade.