This week we watched the currency market staying within the same ranges as no decision came from the Greek government nor the European Parliament. The ranges were fully maintained and there wasn´t any obvious opportunity to trade. It should be the time chance to review our trades and backtest as well as a great opportunity to reinforce one of the oldest mottos of trading: ‘Knowing when not to trade is as important (or more) than knowing when to trade’.

That being said, EUR:USD stayed within the same 2 week range between 1.15 and 1.12 as the rest of the market followed the same stagnation period.

Regarding the Indices, on the European side, CAC and DAX are continuously breaking new all time highs at 4838 and 11156 respectively. The FTSE still testing the 6850 level even after a more decisive week when checking each day’s price action.

NASDAQ and S&P are also breaking new all time highs by the day while the NASDAQ seems to still be retesting the 18040 level of resistance from the previous high in December.

On the Asian side, Hang Seng remained within the range mentioned last week as the Nikkei broke the previous level and is now 18360.

As for the main commodities, Gold and Silver are still on the downwards for a month now.

Today, Friday the 20th, was the deadline for the Greek government to state their decision regarding the national debt payment. Currency traders all over the world will be eager to find if today is the day that price starts resuming some significant action.

Next week there will be some announcements from both the European and the American sides: Tuesday and Wednesday, president of the European Central Bank Mario Draghi will deliver a speech that should at least throw some clues regarding the Eurozone and the Greek debt. There should also be some news regarding the capital injection promised at the end of last year.

On Thursday, the LTRO (Long Term Refinancing Option) announcement might be the definite number that investors use to decide the current momentum of European economy.

Regarding the current charts, we can pretty much apply the same analysis from last week:

EURUSD – we are still waiting to see the 1.12 level broken to the downside as this was just another really slow and unusual week;

GBP:USD – The reversal to the apparent uptrend now is starting to look clearer and more attractive to wait for buying signals;

USD:JPY – after the retest on the 16th and 17th, price failed to resume the uptrend and is now (as everything else on the currency market) hesitating to show any decisive moves;

Indices: for most European indices we repeat the same advise – to wait for the pullbacks and stick to the trend… Just the same, for the American Indices, we now have confirmed the break of the previous highs so we will wait for price action to allow us to jump in once again.

Gold and Silver are now bouncing at an interest trendline that might be the support for the long term uptrend mentioned on previous issues of this report. Wait for price to tell us what to do is always the first thing as this one will also depend on whether price reverses to the longer term reading of the charts or the more simple yet usually effective continuation of the current downtrend. 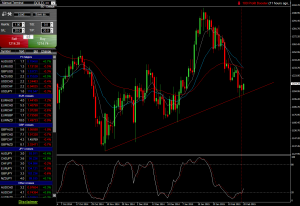