The sterling’s gain may be short-lived as losses on Wednesday were realized after the U.S. Presidential Debate between President Trump and former Vice-President Biden took place and optimism on Brexit deals could be misplaced after U.K-EU trade talks that got underway on Tuesday.

The sterling had a strong start in the week which may hint a progress over a post-Brexit deal with optimistic comments from both the U.K. and EU, but “nothing has changed,” Commerzbank said.

The forex market, however, “seems to be taking a more optimistic view,” at the “risk of bitter disappointment if the negotiations this week do not result in any progress,” it added.

Amidst the souring U.K-EU relations, the talks come after British Prime Minster Boris Johnson proceeded with an internal market bill that undermines the Brexit withdrawal agreement.

In an attempt to extend an olive branch, the U.K. submitted a new draft negotiating papers to find a way past the key sticking issues including fisheries, the “level playing field,” and social security coordination, according to media reports.

Aside from Brexit, the Commerzbank also warned that the surge of the pound may be short-lived due to the resurgence of Covid-19 that has forced the U.K. government to renew measures, that could be “stepped up” to curb the outbreak.

Further restrictions would hurt the economic recovery and prompt the Bank of England to re-consider negative rates despite Bank of England member David Ramsden shrugging off the idea on Monday.

“If we do not see some relief on the corona front in the UK soon speculation about further expansionary measures and negative interest rates might increase again and put pressure on sterling,” Commerzbank Said. 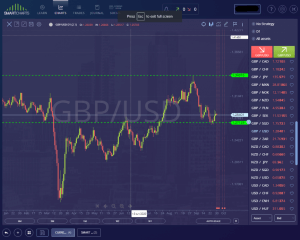 In the daily charts of GBP/USD, the pair opened at 1.2856 on Wednesday morning Sydney Session.

The sterling bagged gains since the opening of the market on Monday in alignment to a possible outlook of Brexit concerns. Speculations of a trade agreement to be settled before the Oct. 15 deadline boosted the sterling’s outlook.

We can see that the price bounced from the support level at 1.27129 on Friday last week and inched higher til Tuesday.

However, the strength in the Sterling seems to be short-lived as it inched lower after the U.S. Presidential debates between President Trump and former Vice-President Joe Biden. Further confirmation for the decline of the sterling is being eyed by sterling bears especially when it touches the support level once again.

The possibility of the sterling heading lower against the U.S. dollar may depend on the upcoming Fed speech and GDP data releases later in the day.