ECB could boost Brexit prospects as China placates the markets

European markets are basking in the glow of a fresh Chinese liquidity injection this morning, with markets a sea of green as we head into London lunchtime. Today’s move by the PBOC has also given some respite to the struggling Aussie dollar, which has managed to find some temporary support at 0.7120, which is just above Tuesday’s low, which was the lowest level since February 2016.

The Chinese central bank, the PBOC, injected a fresh 60 billion yuan into the Chinese banking system this morning, which is the first injection for two weeks and comes hot on the heels of rising bond yields in China, which have spiked sharply this month, and remain at their highest level since June. However, this was not enough to save the Hang Seng and the Shanghai composite equity indices, which remain under pressure and are both now technically in bear market territory. Combined with the weak Aussie, which continues to look shaky from a technical perspective and is a good FX proxy for Chinese economic fortunes, the PBOC will have to inject a lot more money into the Chinese economy to stop the slide in Chinese and Hong Kong equities, which haven’t responded to the PBOC’s piecemeal approach to quantitative easing.

Why China needs to loosen the purse strings

Trade tensions with the US and fears over a debt bubble are the key drivers of the downward pressure on the Asian indices – the South Korean and Indonesian equity indices are both down approx. 15% this year. Chinese economic prospects are also a hindrance, with the latest trade balance figure for August suggesting that exports have been impacted by US trade policy, at the same time money supply is also shrinking, figures released this morning saw the headline M2 figure slip to 8.2% for August, down from 8.5% in July. Although this figure sounds huge in comparison to Western money supply levels, it is worth noting that this is one of the lowest ever levels for money supply in China, and the money supply is shrinking at the same time as the economy is slowing, which could exacerbate economic conditions.

This also gives the PBOC room to inject more liquidity into the financial system if they deem fears over levels of bad debt to be inferior to fears about the health of the Chinese economy. This is the path that the Federal Reserve took in 2008, it pumped money into the US financial system to ease credit crunch fears emanating from the financial crisis that was caused by bad debt. The US economy has been expanding since the Fed’s QE programme and the stock index has had its longest ever winning streak. Of course, it may not be politically astute for Beijing to follow the US model at this moment in time, however, we do believe that China will have to embark on a more pronounced ‘Fed-style’ liquidity programme in the coming months to ensure that the economy avoids a hard landing.

GBP could be on the rebound

Elsewhere, the pound is managing to hold on above $1.30 for now, with the main reason being arch-Brexiteer Jacob Rees Mogg saying that the UK prime minister is “worthy of support”. While we doubt Rees Mogg’s abilities to support the pound due to his tenancy to stab Theresa May in the back, we do think that this week’s GDP and wage data supports a brighter outlook for the pound as we move into the winter months. While the pound remains at risk from Brexit news-flow we are wary of expecting too large a jump in GBP/USD. However, if the UK and EU can agree a Brexit deal in a special November summit (as has been reported today), then the overdue recovery in the pound could have legs.

Until then, however, any pound bulls could take a look at GBP/AUD. With the Chinese authorities unwilling to provide QE support to China’s economy at the same time as US-China trade tensions remain high, we continue to think that the AUD may come under pressure. GBP/AUD could test 1.8500 – the high that has acted as stiff resistance since April. However, a break above here could see a serious rebound in GBP/AUD, back towards 1.95 and then to 2.0.

European stocks are shrugging off news that the ECB is set to downgrade its growth forecasts for the region when it meets on Thursday. The source of this news, who remained anonymous, said that the cause was weaker external demand, particularly the UK and Turkey. This report is interesting for two reasons, firstly it could put pressure on the ECB to push back on reducing its stimulus programme, although some members including Germany are desperate for monetary support to the come to an end. Secondly, if EU trade to the UK is getting hampered by fears that the UK and EU won’t reach a trade deal in time for the 31st March 2019 Brexit deadline, could this spur the EU to give the UK the Brexit that it wants in order to protect its own economic interests? Is this one reason why the EU negotiators have softened their stance towards the UK in recent weeks?

Why EUR/GBP is in a dangerous position

From a markets perspective, this could support a further decline in EUR/GBP, which has fallen more than 150 pips already since peaking at the end of August. The next key level of support for EUR/GBP is 0.8835, the 200-day sma. Interestingly, the weaker growth outlook is not effecting European stocks today. If the euro continues to decline, then we could see the German Dax index pick up, as it tends to have an inverse correlation with the EUR, as you can see in the chart below.

Looking ahead, tomorrow’s deluge of central bank meetings could set the tone for FX and equities for the next few sessions. For now China and Eurozone growth woes seem to be driving markets. Watch out for our central bank watch due out later today.

Chart 1: Dax and EUR/GBP, normalised to show how they move together, as EURGBP rises the Dax tends to fall, thus as the euro falls, the Dax could rise. 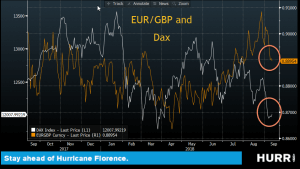