On Sunday, UK Prime Minister Boris Johnson said that a trade deal with the European Union was “there to be done”.

The Brexit negotiators have been urged to see the UK as an “independent state” which support Johnson’s upbeat stance.

“I think it’s there to be done, the broad outlines are pretty clear.” Mr. Johnson told reporters.

“We just need to get on and do it if we can” he added.

Meanwhile, on the economic front, demand for the sterling could see an improvement on Tuesday, if the latest set of UK labour market can impress.

An uptick in average earnings at the end of the third quarter could take a temporary downturn on UK’s economic outlook.

Higher levels of wage growth would bode well for the UK economy, given the significant role that consumer spending plays in shoring up the fragile service sector.

On the other hand, the mood of GBP exchange rates may sour in response to September’s unemployment rate if it picks up as anticipated.

An increase from 4.5% to 4.8% would suggest that the labour market continued to move in a negative direction last month, adding to the existing worries over rising joblessness in the UK.

While the government has since opted to extend its furlough scheme until March, the lingering prospect of an impending wave of winter job losses could still weigh on the demand for the sterling.

Meanwhile, in the fall out of the US Dollar in the post-election sentiment, uncertainty over the dollar means a positive outlook for the sterling.

The uncertainty could put the US in a state of political deadlock until 2021, leaving the economy exposed to increasing pressure. Thus, further weakening of the dollar is a bullish outlook for most of the other major currencies paired with the greenback including the sterling. 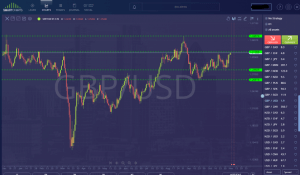 In the daily charts of GBP/USD, the sterling gained against the dollar early Monday morning in the Asian trading session.

However, if the price continued to resist at 1.31966, we can expect the price to edged lower and re-test the support level at 1.28685. The weakening dollar upon the victory of Biden is most likely a positive for the sterling and there is a high probability that the pair will break out from the resistance in 1.31966 and further push pair higher in the coming days.