A French EU lawmaker who chairs the European Parliament’s fisheries committee told Reuters there could be no annual quota negotiation in a trade deal with Britain, sticking to a tough line from Paris that could make a Brexit deal more difficult.

The EU and Britain are locked in crunch negotiations to get a deal on a post-Brexit trade ties in place before an end-year deadline. Agreement on fish is one of the three stumbling blocks.

The EU wants to secure consistent rights to fish in British waters, an issue important to France, where coastal fishing communities are politically influential. Britain wants a deal more like that of non-EU member Norway, under which quotas are set each year.

Two EU diplomatic sources said other member states in the bloc are trying to get France to compromise. But, speaking to Reuters, the EU Parliament’s fisheries committee’s chairman, Pierre Karleskind, said avoiding annual negotiations over access and quotas was one of our “red lines”.

“Who will invest in a fishing boat worth 3 million euros if they don’t know whether they have the right to fish in two years time?” said Karleskind, a member of French President Emmanuel Macron’s liberal bloc. The EU parliament must approve any deal.

The bloc has long said annual fishing quota negotiations are unacceptable, but sources have signaled a possible compromise.

Germany, which wants a trade deal to prevent tariffs hurting its automakers, is seen as pushing for a deal on fish. Britain and Norway reached a separate fishing agreement, which German Chancellor Angela Merkel said proves “agreements can be found”.

Some diplomats in the bloc told Reuters France would need to budge if there is to be a deal.

“The French realise full well that their demands on fisheries were unrealistic. We need them to climb down at some point,” said an EU diplomat who follows Brexit and spoke under condition of anonymity.

Karleskind said some countries at last week’s EU summit had initially voiced a “vague” willingness to compromise on fishing, but that even those with no claims in the North Sea understood unity was important.

“They quickly get back into line as soon as we start talking about it,” he said. “You could ask ‘why should Greece care about fishing in the North Sea?’. But if we show weakness in the face of claims in the North Sea, what signal are we sending to Turkey in the Mediterranean?”

EU Brexit negotiator Michel Barnier met Merkel on Monday and is also due to meet French President Emmanuel Macron. EU sources said one purpose of the meetings is to ease French reluctance to compromise. Barnier is also due to call EU fisheries ministers including in Denmark, Ireland, Germany and Poland.

Britain and the EU made considerable progress in talks last week, including on aligning social benefits, according to sources in the EU who were left believing an agreement was getting closer.

But there was no breakthrough on fisheries or the other two most contentious issues – fair competition and ways to settle disputes. The two sides have given until mid-October to assess if a deal is in the making, but sources told Reuters the EU is gearing up to keep negotiating until as late as mid-November. 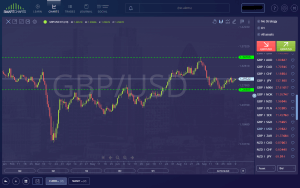 In the daily charts of GBP/USD, the sterling gained against the dollar early morning in Sydney Session.

The GBP/USD pair edged up 0.16% to 1.2954, holding firm throughout the week as investors continue to monitor the progress towards a Brexit divorce deal between the U.K. and European Union.

With the USD wounded due to the uncertainty of the U.S. Presidential Elections and the resurgence of Covid-19, other major currencies are gaining from these losses especially the Sterling.

The ongoing Brexit woes also boosts the sterling as of the moment but still uncertainty whether the pair is bullish or bearish is yet to be decided as the pair is still trading within the support and resistance level.