The biggest mover this week was the Aussie after Australia’s jobless rate jumped to a 12-year high in July, surpassing the U.S. level for the first time since 2007 and sending the local currency tumbling.

The unemployment rate rose to 6.4 percent from 6 percent, the statistics bureau said in Sydney, versus the median estimate for unemployment to hold steady in a Bloomberg News survey of economists. The number of people employed fell also.

The data underscores a division in policy outlook between the Federal Reserve, which markets bet will tighten next year, and the Reserve Bank of Australia’s flagged period of stability for its record-low benchmark. Australia is losing its developed-world-beating status as the mining investment boom that powered it through the global financial crisis wanes.

In other news, The European Central Bank kept interest rates unchanged at record lows as the Ukraine crisis strengthened the headwinds facing the euro area’s recovery.

With Italy relapsing into recession and signs of slower growth elsewhere, Draghi is likely to be questioned on how the 18-nation economy will cope with a conflict in Ukraine and sanctions against Russia that companies say is hurting trade. Draghi has said large-scale asset purchases are an option for dealing with a severe economic shock, leaving investors seeking clarification on what the trigger could be.

Bank of England Governor Mark Carney is gaining a reputation for upsetting the financial markets. On Wednesday this week, Carney speech sent the pound tumbling towards its biggest daily fall in six months by seemingly pushing back the prospect of a rate hike this year.

Coming from a policymaker who championed predictability when he arrived in London a year ago, his apparently alternating signals on interest rates have left many investors perplexed when last June, he made sterling leap by warning investors that they were not sufficiently pricing in the chance of an early increase in Britain’s record-low benchmark interest rates.

Elsewhere the EURO remained week against most of its peers as data continued to underperform with the German ZEW economic sentiment reading coming in much weaker than previous alongside weaker than expected German and French GDP and inflation remaining stagnant.

The US dollar was the major winner this week, dominating most other pairs. It strengthened to an 11-month high versus the euro after minutes of the Federal Reserve’s July meeting showed policy makers raised the possibility that the central bank may increase interest rates sooner than anticipated.

A gauge of the U.S. currency reached a six-month high while emerging-market currencies slumped as the Fed came closer to agreement on an exit strategy from aggressive monetary stimulus. There was no discussion of the timing of a rate increase in the minutes. Fed officials have forecast that it would occur sometime next year. The central bank has kept its benchmark rate at almost zero since December 2008.

In other big News, there was a split in votes from the Monetary Policy Committee as Bank of England Governor Mark Carney lost his consensus on interest rates this month as two policy makers broke ranks and voted for higher borrowing costs.

In the first split on rates in more than three years, Martin Weale and Ian McCafferty wanted to see the interest rate raised by 25 basis points from a record-low 0.5 percent, according to the minutes of the Monetary Policy Committee’s Aug. 6-7 meeting. The remaining seven members, including Carney, opted for no change, saying early tightening could leave the economy vulnerable and jeopardize indebted households.

The data out of Europe this week continued to underperform keeping the Euro weighed down against most of its counterparts. Euro-area economic confidence fell more than forecast, Spanish consumer prices dropped the most in five years and German unemployment unexpectedly rose in a burst of data backing Mario Draghi’s warning that more stimulus may be needed.

The biggest fear for the ECB is that of deflation. Europe is well beneath the 2% target set by the board and with German CPI coming in flat (0.0%) on Thursday, there are little positive signs to say this is improving.

In contrasting news, data out of the US continued to outperform. Thursdays GDP figure beat estimates as well as a slight improvement in the unemployment rate. These data points continue to fuel the economic fire in the US and keep the dollar supported.

One final point is on the geo-political situation with Russia and Ukraine. Tensions have arisen again, with contrasting reports causing some volatility across the safe haven asset classes including JPY, CHF and Gold.

1. EURJPY (Daily Chart) – Power Pivot Trade Short – 04.08.2014 – A beauty of a continuation trade. Euro’s pains came to the fore this week alongside the stronger ‘safe haven’ JPY.  However last week we had the all-important 50% fib retracement back to horizontal and 200ema resistance. This tied in strongly with the hidden stochastic divergence and the key reversal high test bar. Taking a power pivot trade also accommodated a decent 3.5:1 reward to risk back down to the lows which it duly hit on Wednesday.

2. FTSE100 (Daily Chart) – Power Pivot Trade Long 11.08.2014 – Price had sunk lower into a very clean horizontal level of support around the 6550 area. Here price was seen to clearly react to this level, producing a low test reversal bar at the point of entering the support zone. This coincided with some very subtle stochastic divergence and 1.272 fib extension. With the setup primed, the power pivot orders were placed – entry above the high of Friday’s bar with a stop under the low. Entry was triggered on Monday before pushing slowly higher throughout the week. Price reached +1% so stops were moved to break even and the trade is still open to the tune of +2.6%. 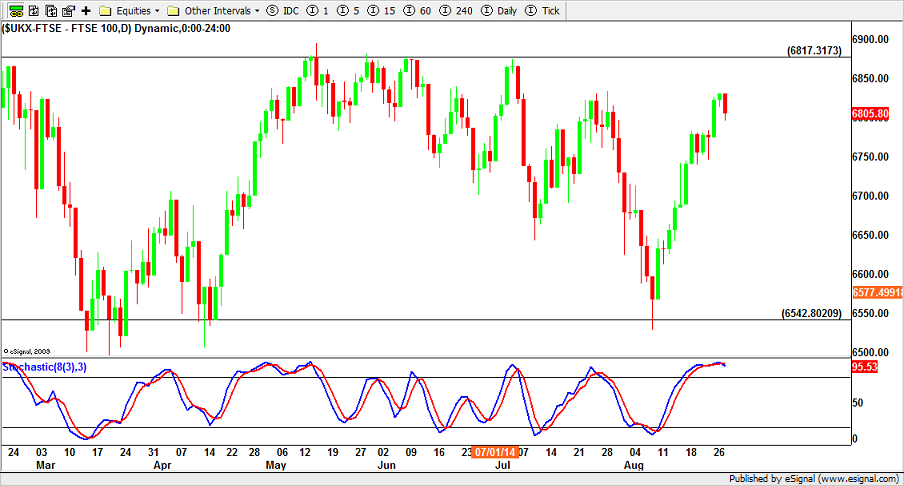 3. USDJPY (Daily Chart) – Breakout of Resistance – 19.08.2014 – The USD was having a fun time this week, strengthening across the board especially against the weaker currencies such as the JPY. There was key resistance at 102.80 area where price had reacted too several times in the past few months however this time we got a clear close above. Trading this breakout with a tight stop under resistance, just in case it was a false break, gave an incredibly tight stop. The next day price aggressively broke higher reaching another key level of resistance at 103.70 where profit of +3% was taken after price stalled. 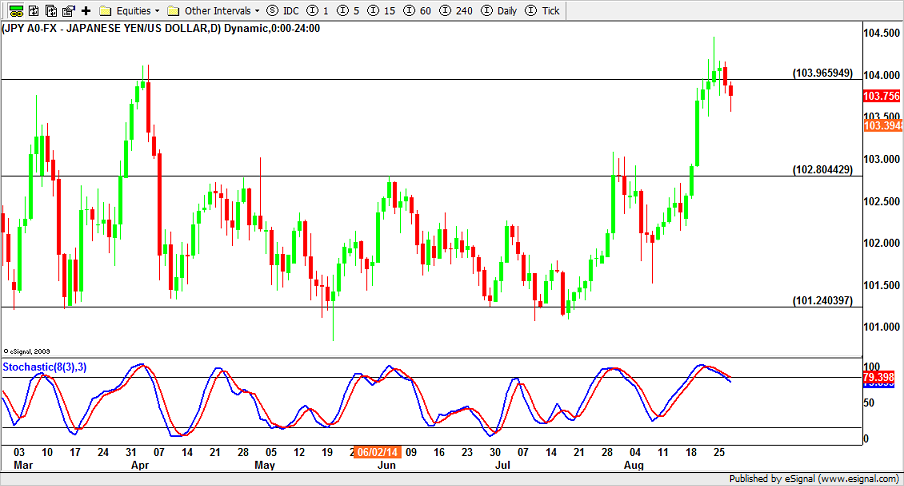 4. NZDUSD (Daily Chart) – Power Pivot Short – 19.08.2014 –  Last week provided a nice healthy retracement on the daily chart, returning back to key resistance at the big 8500 level. This was also the 786% fib level, offering confluence. Here this coincided with some clear hidden divergence suggesting price was ready for another leg down to the next level of support at 8400. The cherry on the cake however was the double inside bar formation. 2 clear as day high test reversal seller inside bars stood side by side. If ever there is an obvious clue for market direction, this is it. They were both screaming short. This played out perfectly as the market sold off aggressively the next day triggering entries just below Mondays low, with a stop just above the most recent swing high. This kept the risk minimal, allowing for a decent +1.5% trade by taking profit at support. 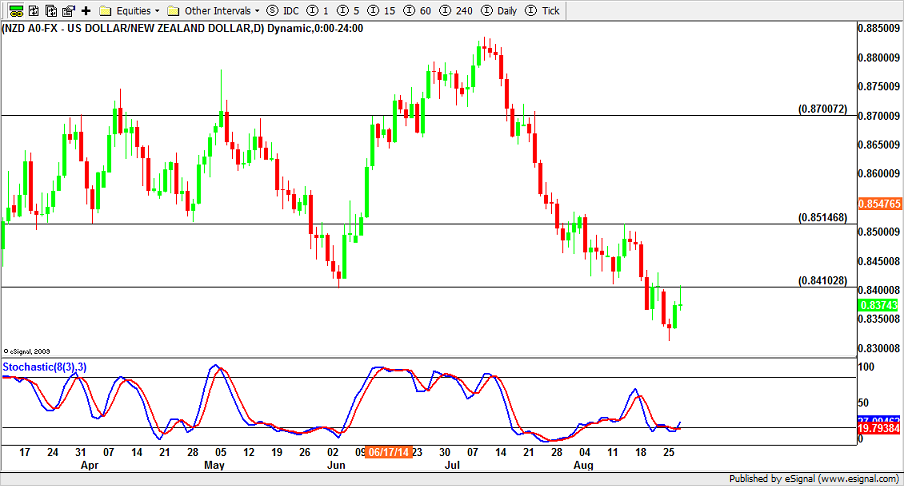 5. USDCAD (Daily Chart) – Double Top Power Pivot Short – 27.08.2014 – This pair produced a clear reversal double top pattern this week, just breaching the high it set at the start of the month. This was also a key level of horizontal resistance, as well as the big 1.1000 price number. The strongest signal however came in the form of stochastic divergence, showing that even though priced had slightly breached higher, the stochastic indicator peak hadn’t. The reversal timing then came on Tuesday in the form of a bearish outside seller bar. Taking a break of the low, stop above the high via the power pivot strategy would have kept risk minimal whilst maximising reward to the tune of +1.6%. 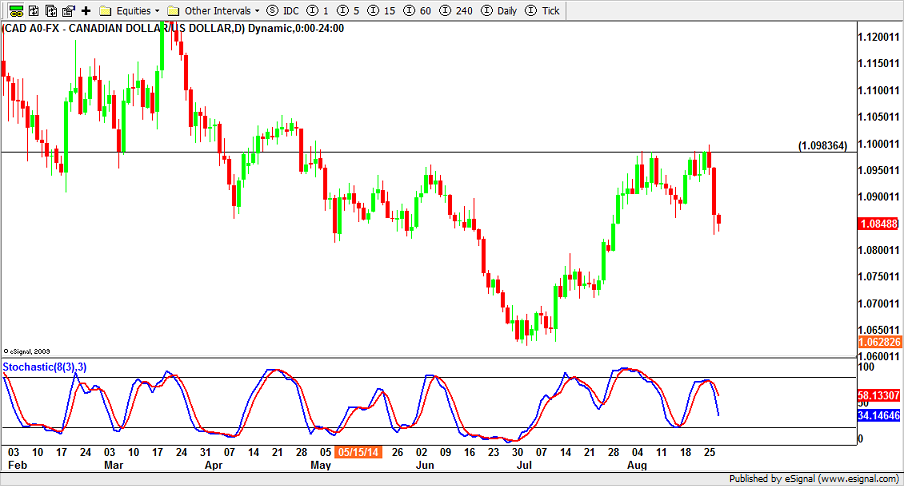 Current opportunities – these are hypothetical trade setups and not all trades will trigger or setup. It is important to seek guidance on trading these setups before risking your own money. Below are areas where we are looking for an opportunity for a trade, not exact levels to buy or sell. Price Action at the time can only dictate our approach. 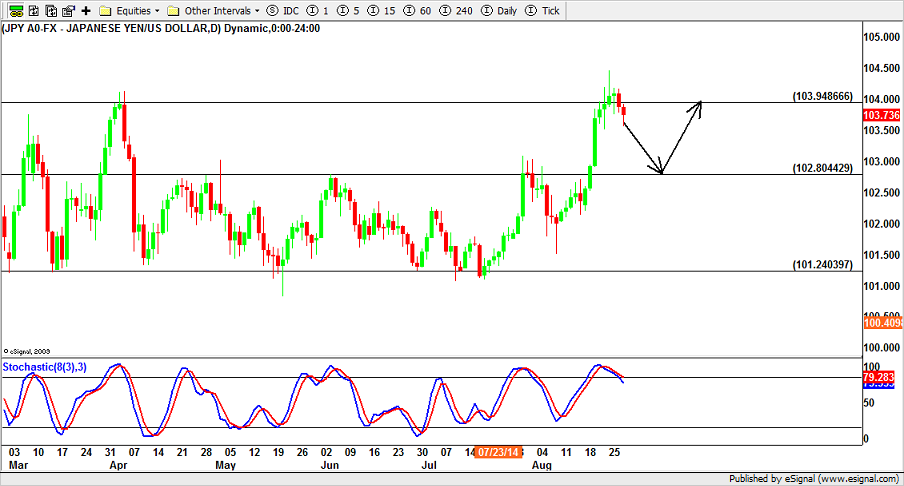