An indecisive week on the currency market… EUR and GBP still within the range of the major price action. On the Indices side, CAC and DAX now finally seem to have stopped the upwards trend that started in beginning of the year while FTSE saw most of the gains from last week completely given back. Gold still stuck around 1200 while Oil within the range from January.

Price starting to pick up the overall trending moves from the previous months as US Dollar now showing signals of renewed strength. On the other hand, all American indices still stuck within the past 2 weeks range. On the Asian side, the Nikkei proved once again to be on a clear uptrend with yet new highs being broken on a daily basis whilst the Hang Seng, after the signals last week, jumped up and broke the previous all time high. Gold and Silver still showing some mixed signals while Crude now at a proven range between 54 and 44.

All the EUR crosses showing EUR weakness again while Cable retested the 1.48 level from 2013. On the Indices side, CAC and FTSE still breaking all time highs as DOW, NASDAQ and S&P still showing buy signals but struggling to go further. Gold still stuck in a very tight range while Oil was the surprise of the week as it broke through the 54 level to the upside and the Canadian dollar followed.

EUR showing clear decision while the Canadian dollar proved its strength against most currencies. But the biggest moves this week came from the British Pound after hitting the 1.48 support level. DOW, NASDAQ and S&P tuck between the same levels as for the previous 8 weeks. Nikkei breaking the all time high at 20255.

At the currency market this week, an unexpected weakness from the USDollar where all majors and minors proving it. On the stock market indices Europe is facing a bigger pullback after weeks of nonstop uptrend while the Asian indices kept pushing to the upside breaking new all time records. Oil price showed yet another rise in price although yet not convincingly. 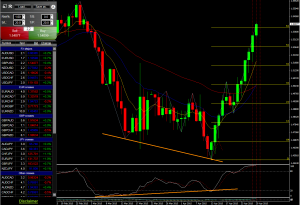 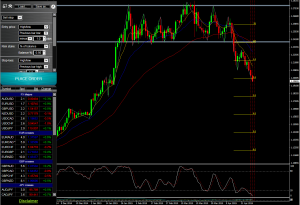 Current opportunities – these are hypothetical trade setups and not all trades will trigger or setup. It is important to seek guidance on trading these setups before risking your own money. Below is the current Gold weekly chart. 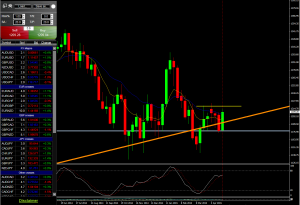